The Truth at Last: Lewinsky finally admits: "I Did it for the President"

March 14, 1998
In an affidavit released yesterday but widely overlooked, Monica Lewinsky admitted that she did it for the President. 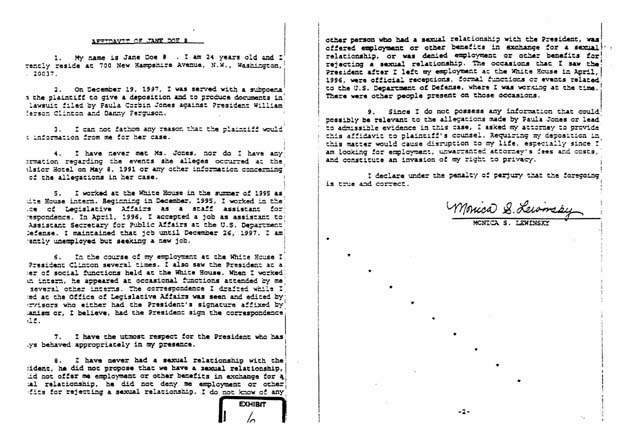 Following is the text of the affidavit by Monica S. Lewinsky, the former White House intern at the center of accusations of sexual misconduct by President Clinton, which was filed in connection with Paula Corbin Jones's lawsuit against the President. The affidavit was included by Ms. Jones's lawyers in their filing on Friday in response to a motion by Mr. Clinton's lawyers to have the suit dismissed. Although it is standard procedure to describe it as an "affidavit of Jane Doe," it is signed by Ms. Lewinsky.

2. On Dec. 19, 1997, I was served with a subpoena from the plaintiff to give a deposition and to produce documents in the lawsuit filed by Paula Corbin Jones against President William Jefferson Clinton and Danny Ferguson.

3. I cannot fathom any reason that the plaintiff would seek information from me for her case.

4. I have never met Ms. Jones, nor do I have any information regarding the events she alleges occurred at the Excelsior Hotel on May 8, 1991, or any other information concerning any of the allegations in her case.

5. I worked at the White House in the summer of 1995 as a White House intern. Beginning in December 1995, I worked in the Office of Legislative Affairs as a staff assistant for correspondence. In April 1996, I accepted a job as assistant to the Assistant Secretary for Public Affairs at the U.S. Department of Defense. I maintained that job until Dec. 26, 1997. I am currently unemployed but seeking a new job.

6. In the course of my employment at the White House, I met President Clinton several times. I also saw the President at a number of social functions held at the White House. When I worked as an intern, he appeared at occasional functions attended by me and several other interns. The correspondence I drafted while I worked at the Office of Legislative Affairs was seen and edited by supervisors who either had the President's signature affixed by mechanism or, I believe, had the President sign the correspondence itself.

7. I have the utmost respect for the President, who has always behaved appropriately in my presence.

9. Since I do not possess any information that could possibly be relevant to the allegations made by Paula Jones or lead to admissible evidence in this case, I asked my attorney to provide this affidavit to plaintiff's counsel. Requiring my deposition in this matter would cause disruption in my life, especially since I am looking for employment, unwarranted attorney's fees and costs, and constitute an invasion to privacy.

I declare under the penalty of perjury that the foregoing is true and correct.

Here is a link: Lewinsky Now Here are links:


Return to my Home Page