I am not really interested in this story. Personally, I like girls. If somebody else likes boys, I am not much concerned about that.

Nevertheless, I have been bombarded the last few days with people asking me questions about what do I think that the fact that Arthur C. Clarke, creator of Hal and author of the famous novel and movie, 2001: A Space Odyssey, who lives in Colombo, Sri Lanka, advocated pederasty in an article which appeared in the Sunday Mirror in London on February 1, 1998.

Here is a link to that article plus a photograph of Arthur C. Clarke. I have no opinion about this. 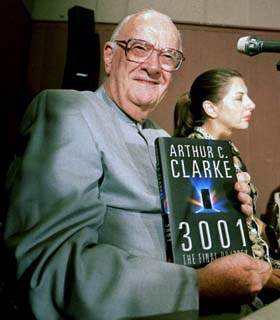 Clarke is credited with developing the concept of the communication satellite and was once nominated for the Nobel Prize. He is best known for co-writing the screenplay with Stanley Kubrick for the 1968 film 2001: A Space Odyssey. The film was produced, directed, co-written, edited and effects supervised by Kubrick, and was adapted by Clarke into a best selling novel. The film is based on a 1951 short story by Clarke titled The Sentinel. Clarke has recently published 3001, a sequel to 2001.

UPDATE: Arthur C. Clarke has been cleared of all possible charges by Sri Lankan Police.

Here is a link: Arthur C. Clarke: A sufficiently advanced technology is indistinguishable from magic.

Return to my Home Page